From the creator of Twisted Metal and God of War, Twisted Metal is back only on the PlayStation 3 system. Developed by the original team credited with carving out a new gaming genre, Eat Sleep Play, founded by David Jaffe and Scott Campbell, unleashes Twisted Metal onto the PS3 with a devilishly pure experience and a whole new look that is deeper, and madder than ever before.

Twisted Metal is an over-the-top, vehicular combat game exclusively for play on PlayStation 3. Gameplay revolves around demolition derby style action set across multiple maps in which last contestant alive receives virtually whatever they desire. The game contains both an engrossing single player campaign story mode, as well as multiplayer modes which support co-op and 4-player action locally, as well as 16-player support online. Additional features include: returning characters from earlier releases in the game franchise, 17 vehicles that can be customized with a wide variety of weapons, destructible game environments and more. 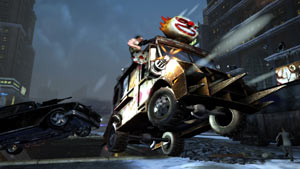 Twisted Metal returns with unhinged car combat destruction and action movie mayhem. A PlayStation franchise exclusive since the release of the original Twisted Metal game back in 1995 for PS1, this most recent release is packed with unique weapons that emerge from demonic vehicles as players unfold the demented tale of a cast of characters, led by Sweet Tooth in story, co-op and online modes. The mayhem is ratcheted up in multiplayer modes with 2-4 player competing locally and up to 16 players online competing in a killer-take-all back and forth battle royale on wheels.

Be the first to review “TWISTED METAL – PS3” Cancel reply